As a complete newbie to diving, I can honestly say that before I started working for Divecrew, I had no clue about anything scuba-related. No idea about the “bends”, no idea about regulators (which I naively believed to be called respirators) and no idea about cylinders, which Sue ever so kindly a-likened to bombs on my first day. The expression ‘being thrown in the deep end’ perfectly summed up my new role… if the throwers were two divers who own a business and an adorable puppy called Coral, and the deep end was the 8m deep, low visibility waters of Wraysbury Quarry! Needless to say, as a newly appointed Scuba Diving Administrator, I needed to learn how to dive.

My first few dives took place in the 2m deep pool at Eagle House School, led by Mr Bond himself (whether that was lucky or not I am still trying to determine!) and assisted by Stu and the infamously large camera. I had suspected that I would be a chilled diver and the reality was that perhaps I was a little too chilled. This being summed up by my reg retrieval, which had Steve looking on and rolling his eyes under his mask, as I slowly swung my arm around at least 5 times to catch the reg, which was already right in front of my face.

My second round of dives were in the 4m deep pool at Aldershot Garrison, assisted by Andrew and Rachael and under the instruction of Rowan – who I had already had in despair as I begged to be allowed to jump off the 10m diving board, and was unsurprisingly denied. His revenge was taken when we did the BCD removal and he jokingly threatened to swim off with mine (prompting another lesson, that underwater laughing is not possible with a regulator in!). It was a great session and Rachael even had the two of us students summersaulting and doing various different hover poses.

Then came the completion weekend. The one I’d been apprehensive about. It’s all very well mucking around in a clear, warm pool, but to be in the cold depths of Wraysbury with a metre’s worth of vis was quite a daunting prospect. Scott was my instructor for this, assisted by Michael on day one and Alan on day two. My initial descent was an interesting one, as hitting into the suddenly visible platform caused both of my fins to fly off, sending me into a flap. The sight of me flailing around must have been a hilarious sight to behold, and not an easy one for Scott and Chris, my buddy, as they attempted to tackle my fins back on – their job only made possible once I followed Scott’s instruction to lie down on the platform, rather than take the both of them out with my chaotic legs. Once this ordeal was over and half of Wraysbury had been churned up by my very helpful self, we went through the open water skills and I truly believe I gained an understanding of ‘once you dive in England, you can dive anywhere’, an expression which I had originally translated as a sympathetic ‘rather you than me’ by customers at the shop who were jetting off to dive abroad. However, I can now very much see where they were coming from.

The visibility cleared up for day two, with it being a generous 2-3m rather than the previous day’s 1m, which we were thankful for as we needed to conquer navigation. Considering my pursuit of a career in the Royal Navy, my first few attempts at underwater nav were remarkably unremarkable, as I’m sure Scott can attest. The first attempt saw me too fixated on my compass, meaning that I suddenly found myself at the surface (exactly on top of Michael and Chris, so at least the direction was right!), my second attempt was more confident, however as my focus was on two wrists rather than one, I very confidently ran myself into a mud wall and had the others wondering why the visibility had suddenly returned to that of the previous day. Third time lucky, I managed it. Despite nearly running into a great big bus that loomed out of the shadows, I managed it, and I am very grateful to Scot and the gang for having so much patience with me. Our final dive was led by us students, which, apart from passing a rather disturbing headless statue, was really good fun. We explored the bus properly and earnt ourselves a ‘we survived a swim with Alan’ stamp, which made it all worth it… oh and the PADI qualification of course.

The course has given me a good insight into what diving is all about and was a fantastic opportunity to get to know various members of this weird and wonderful Divecrew family, which I am happy to now say that I am a part of. It has also definitely left me wanting to do more diving, which taking into account my new job, is a very good thing! 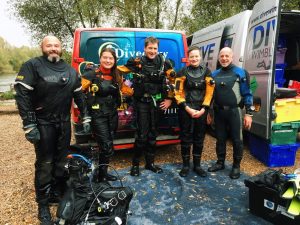 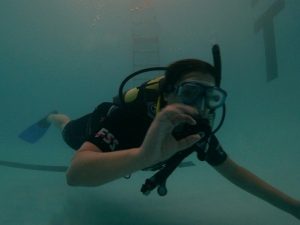